Many congratulations to Sue Norrington, Founder of Concerts for Craswall, on being named winner of the distinguished Elgar in Herefordshire Senior Award for 2018.  More just recognition for her immense contribution to the musical life of our county.

Following the unanimous decision of the adjudication panel, this prestigious award was presented earlier this week by Dr Timothy Brain, Chairman of the Three Choirs Festival Society. Sue will shortly become the temporary and very deserving custodian of the marvellous Elgar maquette.  Her name has been added to those of previous winners. 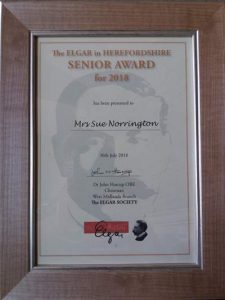 Set up in 2004 by the Elgar in Hereford Group, the senior award was last awarded in 2011. Great news then that the West Midlands Branch of the Elgar Society decided earlier this year to reinstate it.  The accolade will now be presented every third year when Hereford is hosting the Three Choirs Festival.

The eligibility criteria allows the award to be given to anyone, individuals or groups, who have made a significant mark on local musical life as performers, conductors or enablers.

Nominated for all her work over the past  25 years organising classical concerts in  Herefordshire, part of Sue’s citation included the statement:

“Her untiring energy and enthusiasm has been, and is, a beacon to those striving to deliver classical music in and around the county. Her example has inspired others to organise music in their local churches and village halls.”

Commenting today, Sue said “I am very honoured to have been given the Elgar in Herefordshire Senior Music Award, and thank the West Midlands Branch of the Elgar Society for their recognition of my work over the past 25 years.  In addition, I would mention the enormous support of the people of Craswall, who have made my work for the musical life of Herefordshire possible.

I am now standing down from the Trust, but am happy to say that a splendid team are taking over. They are bringing Concerts for Craswall up to date for the future – as everyone will see if you come to our next concert.”

In acknowledgement of her services to music and to community, Sue was also awarded the British Empire Medal in 2016.